There are not many slot games around with a Bounty Hunter theme. So, it is rather exciting to see Chance Interactive release a game based on it. Bounty Hunt like any other slot from Chance Interactive has their brand stamped all over it. The slot is definitely not conventional, at least in the way the bonus features play out. Add to that the impressive graphics work that you can find in the other games of the company, you sure do have a slot game that intrigues players.

Chance Interactive is an Australian based slot game developer that is quite new to the industry. It was founded by gaming professionals in the year 2014. In the short span of time, they have been around, they have managed to reinvent the slot game genre with their releases.

Bounty Hunt is an online video slot with 5 reels, 3 rows and 25 paylines. The slot is easy to play. All you have to do is to set your bet on the bet tab and then hit the spin button. The game also has an autoplay feature to help you during the times when your limbs are too tired to keep hitting the spin button all the time.

The best thing about Bounty Hunt is perhaps that even though it is a slot game you sort of get the feeling that you are playing a story based game. That is thanks to the way the gameplay is constructed. You take on the character of the Bounty Hunter and your job is to hunt down the 3 main antagonists. Each of the 3 antagonists sort of has their own little storylines making this game much more exciting than your average slot game. 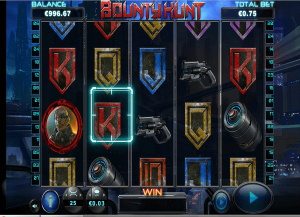 The bonus features of this game are a bomb. First, you have the wild feature. There is no specialised wild symbol here but instead, you have a crosshair which is active every spin and randomly picks out a symbol as a wild.

The free spins round is even more exciting as the wilds that you get here act as sticky wilds and stay on until the end of the free spins. Also, you have the chance to capture all the 3 antagonists during this round.

A slot game that lays as much emphasis on the theme as it does on its gameplay. Now, that’s something rare and that in itself is one of the main reasons why you have to try this game.