Cashapillar Online Slot Machine is a non progressive five reel and has a massive number of 100 pay lines which is powered by Microgaming. The basic theme revolves around a Caterpillar’s celebration party (perhaps it’s anticipated transformation into a butterfly!), and features all the wee creatures of the insect world that we love such as ladybugs, snails, and beetles. The game can be played using freeplay demo slots option, but if you want to win online jackpots and keep what you win you’ll have to deposit real money!

This game has a lot more fun features to enjoy as provided by the win online software features. These include:

The Cashapillar Scatter at Luck’s Casino: 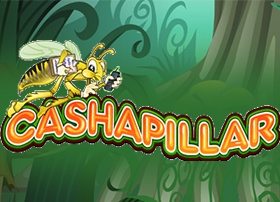 This win online Gamble Feature enables players to gamble any of the prizes won earlier in the game. Players can double or quadruple what they’ve won by guessing the correct colour or suit of a set of cards. Accordingly, players can also lose everything they’ve won if they guess incorrectly, so remember that if you want to win online, you’ll need to choose carefully!

How Much Can Players Win Online Playing Cashapillar Slots at Luck’s Casino?

As mentioned earlier, players can win online jackpots of up to 6,000,000 coins with the right free spin combinations, or up to 2,000,000 on the base game. Granted, those wins are probably few and far between, but there are still loads of ways to win online from matching the featured symbols alone!

That said, the best way to win playing mobile casino games online is to do so responsibly. Never bet more than what you can afford to, and always know when it’s time to cash out so that you can also keep what you win with £200 free signup bonus. This way,  you end the game with a better bank balance than the one you started with!