NetEnt has been in the business of developing online casino games longer than most other developers. This developer was the first to create an online casino with the java platform although it has since advanced to the use of HTML5 and Flash technology. NetEnt has been around since 1996 and has not stopped providing us with wonderful casino games like Fairy Tale Legends.

Fairy Tale Legends has five reels, three rows, and a total of twenty paylines you can aim for. 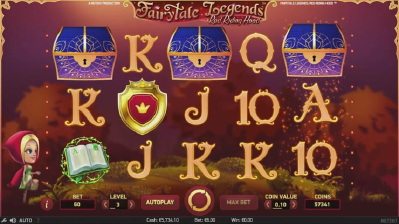 The treasure chest features are activated when you land this icon on the reels three or more times. The Free Spins give you a total of ten free spins. With the Coin Win, you are given a random price. With the Beware the Wolf feature, you have to move through a garden path to Grandma’s house and avoid being eaten by the Wolf.

Fairy Tale Legends is a game that offers a lot of entertainment and interesting features to players. With an RTP of 96.33%, you are sure to leave the reels with a fuller pocket.