Ever wonder what goes in making a team to win? The right combination, the perfect game plan the execution during the day and of course the improvisation while playing. The Football: Champions Cup™ online slot game is a shining illustration of this.

Football: Champions Cup™ online slot game is developed by NetEnt. It is a Swedish based casino developer in the business of developing casino games for 20 years. It continues to lead the digital casino industry with games that are made to impress.

How to Play Football: Champions Cup

Having the right combination is very important in the road to victory. Hence, the team that you select to play for will determine your chances of success. From the many options given, choose the team that you feel will be the best among the rest. This can be done by clicking on the flag of the country of your choice.

Substitutions: Through ‘Wild Symbols’ substitutions can be done. However, you cannot substitute Scatter and and Bonus symbols. 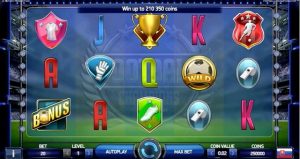 Penalty Shoot-Out : Here, your team will have the chance to alter your fortunes. With the right execution of the game plan, you can be sure to capitalize at this stage. The first opportunity to capitalize will be in the form of scoring a goal for your team. If this does not go according to plan, then you will need to improvise the next time. Such improvisation can be sought in the form of you saving a goal, so as to ensure that your team score is tied with the opposition team. Now, your team will have to go in for another penalty shootout round. Hence, make sure that when the opportunity avails you score the goal and save a goal from being scored.

Championship Cup: This feature aims to emulate the upcoming UEFA Euro 2016 format with a gambling twist. With the art of ‘Free Spins’, you can ensure that your team lifts the Championship Cup through advancing to the various stages of the tournament, such as, knockout, quarter-finals, semi-finals, and finals.

This game is made for those who want to know how to win. It shows that with every failure, success is just waiting near. No matter how bad you may be during the game day, the Football: Champions Cup™ slot game ensures that with each game you play, your increased understanding of it will lead to greater success.