Raging Rhino is based on African wildlife theme. WMS Gaming has come up with a somewhat different type of slot which offers some unique features. The 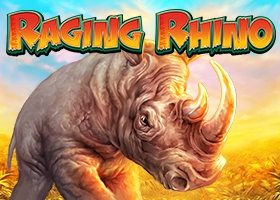 first thing which will come to your notice is that it has six reels instead of standard five. Beautiful African wild lands had been designed at the background which is supported by some really beautiful symbols drawn in a bit 3D style. With this, all these reels can appear in four different positions which offer a number of ways to win.

Raging Rhino is ready on the fields 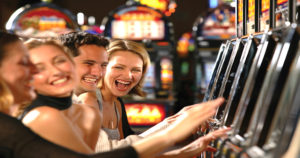 Raging Rhino offers six reels along with four rows of symbols and 4096 different ways to win. In order to win, you have to make the specified winning combinations on the adjacent reels. The sunny background at the backdrop along with a music full of animal sounds will actually lure you on this trip to wild lands.

The game has a baboon, a mongoose, an alligator and a rhinoceros as the high valued symbols whereas the lower ones are the usual card symbols 9, 10, J, Q, K and A.

The wild symbol is depicted by a beautiful sun setting behind an African tree and it appears randomly on the reels two, three, four and five. It can substitute for all other symbols other than the bonus symbol which is a big sparkling diamond and it will trigger the bonus feature for. The Rhino symbol pays the highest amount and it can be seen stacked on all the reels.

Free spins is the only bonus offered in Raging Rhino. It can be easily triggered by landing various sets of these Diamonds on the reels. Though they should be at least three in number in order to trigger the least bonus for you which is eight spins, four diamonds, on the other hand, will give you fifteen spins, five pays out twenty spins and six diamonds gives fifty spins which is the highest in the game. If you will be able to form a winning combination with a wild symbol, it will multiply your wins by 2x or 3x.

Raging Rhino is a famous slot and has gained a reasonable fan-following for itself since its initial days. It offers the highest win of 12,000 which often attract people to give it a hit. Though some players find it more comfortable with the usual pay-line structure, others still do enjoy the variation in this slot game.

Why not take Samurai Split UK Slots for a great spin today!