Red Dragon is a slot game from the works of 1 x 2 Gaming that makes use of the oriental theme. Among the vast range of oriental themed slot games, this game certainly stands-out tall and is quite different. Read more to gain an insight on the features of this game.

1 x 2 Gaming started out by making virtual sports betting software in 2003. Some years down the line, this developer decided to branch out into the world of online casino software development. This decision has seen 1 x 2 Gaming carve out its own space in the online casino gaming world. The distinctive thing about games from 1 x 2 Gaming is the fact that they usually have high RTP; a minimum of 97%. There is no doubt that Red Dragon would further cement 1 x 2 Gaming’s reputation in the coming years.

Red Dragon is a game with five reels, three rows, and a total of twenty-five pay lines. The design of this game clearly showcases the oriental theme. The reels are housed under a roof of oriental disposition. In the hazy background is the silhouette of a Chinese temple framed with lanterns.

The symbols in this game are stereotypical oriental icons. These symbols include a pair of nunchucks, a traditional hat, some sushi, a paper lantern, and a well decorated oriental fan. The wild in this game is a long bearded Chinese warrior in a combat pose. The bonus symbol is a Red Dragon while the scatter is a small oriental themed temple. 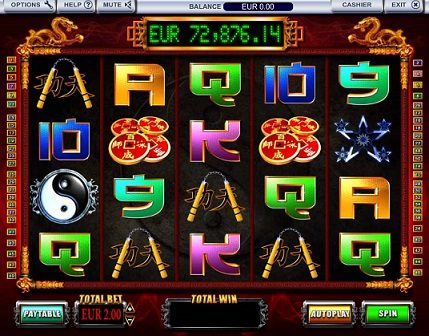 The bonus feature is activated when you land at the Red Dragon bonus symbol on the reels three or more times. When this feature is activated, you are taken to a screen which shows segments of a dragon at the bottom of the screen. Floating out of these are a series of balloons. You have to click on the balloons to reveal a dragon segment before you can get a life. If your click reveals a heart, you would lose one life.

Red Dragon surely deserves to be listed amongst the top oriental slots in the world of video slots gaming. The game has a jackpot that increases a player’s win by 700x. In addition to this, the game has an RTP of 97.32%, giving the house an edge of 2.68%. This would surely make it easier for you to earn a lot during the gameplay.