Esqueleto Explosivo on Lucks Casino is a 17 line and a five reel mobile slot video game powered by the Thunderkick gaming company. This play for real money slot game is based on the national Mexican ‘Day of the Dead’ holy-day and driven 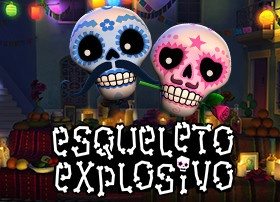 by an entertaining Mariachi band keeping the overall atmosphere incredibly entertaining. Enjoy free gratis casino spins for fun in demo mode or deposit using SMS phone bill to play for real and get the jackpot win on Lucks Casino.

The game is about a character known as Enrico Mortis performing with his Mariachi band in a Mexican town square to celebrate the Day of the Dead.

While it’s certainly possible for players to enjoy sign up deposit slots games, certain features cannot be enabled in demo mode. Further, if you can’t play for real money, you’ll never be able to compete for the big jackpot win! The latter version offers various interesting features for the Esqueleto Explosivo mobile slots video game players, some of which include:

The amazing wild symbol feature present in this play for real slots adventure is Enrico Mortis. He is the yellow skull as well as the Mariachi band leader – aka the Boners!

The wild symbol in this game will explode whenever it lands on the reels
When the symbol is exploded, it will do so together with any other eight symbols next to it thus creating more and more free space for the creation of more winning combinations.

This feature raises a player’s chance of winning by to very high level by activating the Macho multiplier feature.

This is the most sought after feature that play for real money slots enthusiast look for. Activated when the game wild symbol is spotted on any part of the screen as well as when a player achieves a winning combination.

On Lucks Casino, the Esqueleto Explosivo game does not offer the free spins, nor conventional wild symbol or scatter symbols but has other more fantastic features such as the explosive wilds and ‘Cascading Symbols’. The game also has an auto play mode where players can set the game to play a certain set number of spins without any interruption from them.

The highest jackpot award is of 500 coins while the second jackpot is of 250 coins. The game offers a high pay percentage of 97.6% on Lucks Casino. The maximum cash win stands at over £100,000 instant jackpot cash depending on the amount wagered, which as far as play for real money jackpot slots go, is pretty darn fantastic!