Frog Grog by Thunderkick Games is a spooky science-themed slot game. The game is set in a gloomy laboratory filled with mysterious jars, potions etc. Science-themed slots are aplenty but spooky ones such as this are rare to come by and that’s one of the main reasons why this slot may appeal to you.

Thunderkick is a slot game and related platform developing company based out of Stockholm, Sweden. It is a young company with a fresh outlook on slot game development.

Frog Grog has 5 reels and 23 fixed paylines. To win all you need to do is to land the desired symbols on these paylines. But before spinning, you have to set your bet. And for that, you need to click on the bet tab on the screen. You can bet anywhere between 10p per spin to a maximum of 100£ per spin. Once you have set your bet you can hit the spin button. You can also choose to play with the same bet for multiple spins and click on the autoplay option. Clicking this will enable the reels to spin themselves.

Frog Grog is a medium volatile slot and has an impressive payout rate of more than 95%. This generally means that the game is light on your pocket and won’t cost you much. 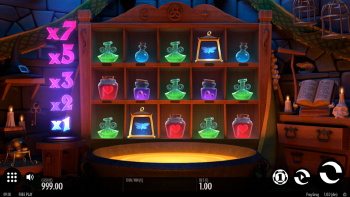 The main symbols of the game are a moth, a heart, a pair of eyeballs, flowers and some green and blue potions . You also have the wild symbol which is the frog. It acts as a replacement for all the other symbols to help you land a win.

As far as the bonus features are concerned Frog Grog has two. The first one is the Dropping Symbols feature where after every win, the symbols that formed the winning payline would disappear and more would fall down from above. There is also an increasing multiplier in play here which increases after every drop.

Then you have the Mystery Game feature which gets triggered on a random winless spin. During this feature, all the symbols except the 3 higher value ones disappear so that you have a chance at landing a high-value win.

Frog Grog ticks all the right boxes as far as slot games are concerned. It has an engaging gameplay that will keep you interested for a long time. And also being light on the pocket helps as well.